Based on a greenfield site alongside the National Trust workhouse with two main marquee stages and many events taking place in and around the beautiful Minster town of Southwell.

The 10th The Gate to Southwell Festival takes place from Thursday 9th to Sunday 12th June 2016.

This year the festival is moving sites, down the road next to Southwell Racecourse, It is a larger site so camping and caravans can be next to the main field. They will be putting on a loop bus service between the site and town centre throughout the weekend.

Southwell's folk festival will coincide with the annual Gate to Southwell procession of Morris dancers to Southwell Minster from Nottingham city centre.

On Thursday to celebrate the tenth birthday there's an evening of music plus a firework display at the site near Southwell Racecourse with free buses between Southwell and the festival site.

For the line-up details as available see the Southwell Folk Festival line-up page.

A campervan pass is priced at £5. Day tickets are also available.

Roots and Acoustic Music across three stages, plus concerts, ceilidhs, dance displays, children’s events, workshops. Real ale & cider festival, food and craft stalls on the festival site.Events around town including sessions in local pubs. Free parking for day visitors. Various dance teams will be appearing in the town and around the festival site. 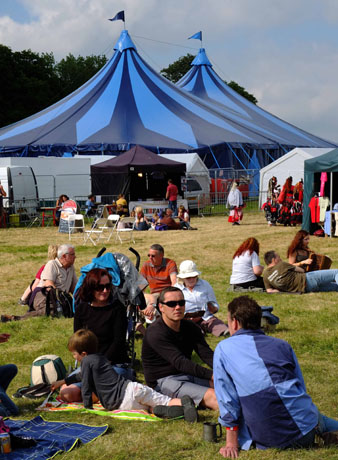