A crazy festival party where everyone joins in and brimming with ideas and creativity that takes place at Mill Hill Field, at Huntingdon, in Cambridgeshire. This is a festival without sponsorship and offers an eclectic musical mix. The dates for this year are confirmed as Thursday 19th to Sunday 22nd July 2012.

Set in a 10 acre landscaped garden, bordering a river and lake, The Secret Garden is a garden-party-gone-crazy. As well as music there's loads of activities for kids and adults alike, and it is more of a party experience. The festival has been granted a permanent licence with a capacity of up to 26,000 for each of the four days.

Early bird tickets have sold out. Tickets for the Secret Garden Party 2012 were being sold on a tiered system. A set number of tickets will are sold in each tier, gradually increasing in price. All tickets have been sold out since mid-April, the fastest sell out yet. A dog pass is also free, and dogs must also have a ticket.

There is also a deposit scheme in operation. This allows a reserved ticket for a deposit of £50; the balance to be paid by 13 June 2012.

This year's theme is "Standing On Ceremony". In 2012 the Arts & Expression theme comes as the festival celebrates its 10th Birthday, and uses that starting point to explore those ceremonies, rituals, initiations, anniversaries and carnivals that bind us together, that emphasize matter over mind, that emphasise our true gifts as humans: social existence. 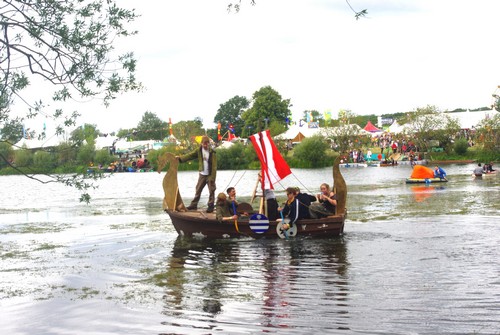