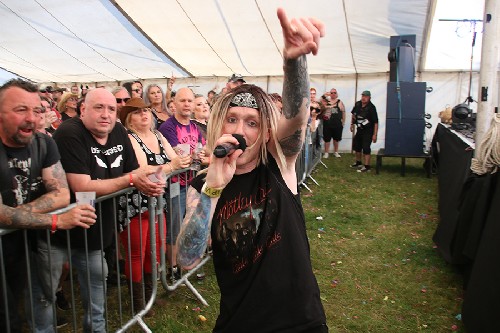 After a two-year hiatus due to Covid restrictions, Rock and Bike Festival made a welcome return to Carnfield Hall.  Rock and Bike Festival has been a regular event on the festival calendar (started way back in  2004) and prides itself on being family friendly. Yes, there are bigger festivals out there, Download is one example. However, the organisers of Rock and Bike try to keep the festival  as a modest sized event. The bands are mainly tribute bands with the odd band being the real McCoy or as close as possible. This year’s bands with original members in them was Anti-Nowhere League, and The Animals & Friends. 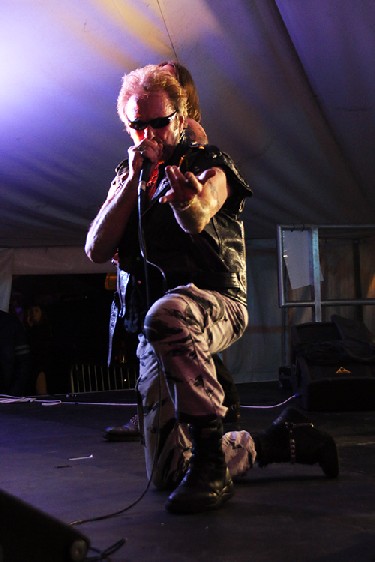 This year the rock n bikers in attendance had the pleasure of basking in blazing sunshine for the entire weekend, some would argue it was a fraction too hot, but I’m guessing the punters in attendance would prefer it to be hot as opposed getting drenched.

The arena site is a modest affair, but they have food stalls to cater for most tastes (burgers, fish and chips, noodles, doughnuts, and hot dogs to name a few) as well as plenty of stalls to buy items from. Items such as t-shirts and humorous wood carvings were available to purchase. Regarding the food stalls the prices for items such as noodles or fish and chips were no more expensive than any other festivals, for example noodles were £8.50, pretty standard for today’s prices.

The two main stages are parallel to each other and if you need to get to the other stage, give yourself around two minutes and you will be situated in front of the other stage. This was handy if you needed to jump from stage to stage. My only criticism is that the stages could benefit with better signage t indicate which one is stage 1 and which one is stage 2. This year also had a tent set up for acoustic acts on the Friday and Saturday evenings.

This years line up had a wide array of rock genres too cater for most people’s tastes, punk rock, soft rock, heavy rock, and acoustic rock, all covered over the three days.
The wonderful thing about the rock and bike festival is that due to the stages being so close together, if there is a clash between some bands that you would like to catch, it is easy to watch one band then stroll to the next stage to catch the last half of the other band.

Some of the highlights of this years Rock and Bike Festival included Motley Crude, (a Motley Crue tribute) they brought an incredible amount of energy to the stage, and the drummers costume is one that will scar you for life. It left very little to the imagination. 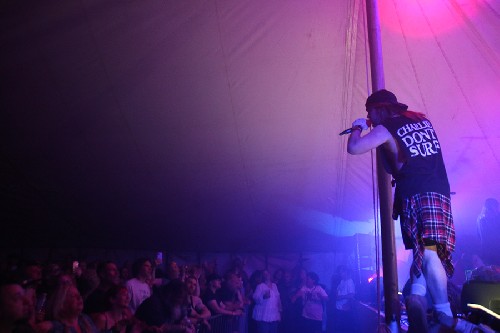 Guns 2 Roses (Guns N Roses tribute) did an impressive job of sounding like GNR. Although Guns 2 Roses were on stage on time, which is more than can be said for then real Guns N Roses.
Another highlight was The Animals & Friends belting out their back catalogue, if it is true that this was their farewell gig then they have certainly left on a high, and just in case you are wondering, yes, they did play ‘House of the Rising Sun’ .

Fleetwood Mac Songbook (tribute to Fleetwood Mac) brought the magic of Fleetwood Macs music to life and sounded extremely close to the original band.
However, the most memorable performance was from Anti-Nowhere League. Even after decades of performing, they still deliver a set with a real punch. They don’t seem to have lost that punk rock attitude either. It was a real trip down nostalgia lane. Especially when they did their rendition of Ralph McTells ‘Streets of London’.

Rock and Bike Festival managed to create a wonderful family friendly atmosphere with great music, and hopefully will continue to be a staple fixture on the festival calendar.