The early bird offer has ended, an adult weekend ticket is priced at £80 including camping. Weekend teen tickets (13-17 yrs old) are priced at £55, parking is £5, and camper/Live-in vehicle passes are priced at £28. Children aged 12 years and under can attend for free.

The 5,000 capacity Nozstock offers 9 venues hosting an eclectic mix of performance, art, electronic supersounds and good old-fashioned guitar strumming. Known for its homegrown, handmade appeal, without any of that brash commercialism and with a unique personality of its own. Where else can you get opera at lunchtime and sock-wrestling of an afternoon?

Nozstock: The Hidden Valley will also offer its guests a programme of cabaret and theatre and has brought on board Birmingham University whose students will be running the technical side of this stage as part of their final degree project. More details to be announced later in the year.

The event offers a range of workshops - free standing, comedy, theatre, arts & crafts, kids, a cinetent, an arts & craft area with sculptures, little Wonderland Kids' Area offering all weekend entertainment for 12s and under, and a chance to jam around the wood fire.

The converted cowsheds include the 'Cubicles', with drum 'n' bass and dubstep, beside it the Bullpen, offering housey beats and alternative dance. 'The Coppice' hosts Tribe of Frog. There's also the 'Bantam of the Opera Theatre' which explores another world with live performance, workshops and after-dark experimental cabaret while 'Laughing Stock' bills comedians.

Kids' entertainment occurs off the beaten track and over the bridge where the 'Little Wonderland' is programmed with workshops, theatre, and opportunities to get interactive.

Food will be sourced locally where possible, offering flavours from around the world with vegan and veggie options too.

Every year organisers try to add a little something new to the site and there's likely to be a new hidden performance space for 2012, festival goers will have to have something of the ingenious detective about them to find it.

Festival goers are encouraged to dress up. This year's fancy dress theme is 'Myths & Legends'.

Gates open at 10am from Friday 27th July. Shuttle services will be on offer from local town Bromyard and to and from Hereford and Worcester before and after the festival. 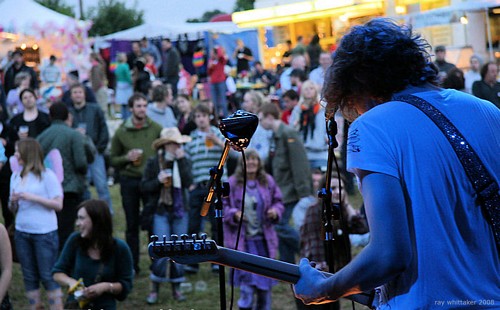