The dates for the third Latitude are confirmed as Thursday 17th to Sunday 20th July 2008, with the festival opening it's gates on Thursday 17th July for some limited non-musical entertainment.

Franz Ferdinand, Sigur Ros, and Interpol are the first act confirmed as headliners with Julian Cope, Martha Wainwright, Death Cab For Cutie, The Go! Team, Seasick Steve, Grinderman, Elbow, The Breeders, and Amadou And Mariam. With Saturday on the second Stage headlined by Mars Volta and closing that stage on the Sunday are Tindersticks. For the line-up details as available please click here.

Latitude isn't just about music, but has a full spectrum of art with individual arenas dedicated to film, theatre, poetry, literature, cabaret, and comedy.

Laughs will be provided at the Pimm's Comedy Arena which is housed in a larger tent and screens outside, headlined by comedians Bill Bailey, Omid Djalili, Ross Noble, Frankie Boyle and Rich Hall in the Comedy Arena. At night, the Comedy Arena hands over to Guilty Pleasures and also Swap-A-Rama makes it's debut on Saturday night when every time the DJs ring the klaxon you must swap an item of clothing with someone next to you.

The Music and Film Arena mixes the alternative world of film and documentaries with live performances and visuals. Mark Lamarr will present a live selection of soul, ska, reggae, country, gospel and rap. Artists confirmed to play live are Buzzcocks, Eli 'Paperboy' Reed and the True Loves and The Heavy. The arena will have many more live acts still to be confirmed.

The Literary Arena will have book readings, stories, discussions and laughter hosted by Vox 'N' Roll, Wordtheatre, Marcus Brigstocke: The Early Edition with book readings and a literary crop including Iain Banks reading from 'The Steep Approach to Garberdale', Mark Thomas, and Dave Gorman with many more to be announced over the coming months.

This year's Theatre Arena will be the world's first green stage fuel cell powered carbon neutral festival stage. Arcola will be providing state of the art low energy LED lighting and a Hydrogen Fuel Cell to power the stage. The National Theatre, The Hammersmith Lyric, Royal Court Theatre, RSC, Paines Plough, nabokov and The Bush all bring new shows to the Theatre Arena. Plus poets Adrian Mitchell, John Hegley and Carol Ann Duffy are all confirmed for the Poetry Arena hosted by Luke Wright.

The Cabaret Arena will hold stage shows which will include Lenny Beige, Vauxhallville and Gawkagogo and plenty more performances to announce in the pipeline.

Also at the festival for the first time is Sadler's Wells Theatre who will be presenting Wayne McGregor/Random Dance, Gauri Sharma Tripathi and Boy Blue Entertainment on a specially designed stage at sunset on the lake at Latitude. Also appearing there will be The Irrepressibles with their orchestral brilliance.

Plus Lavish artists who brought the multi-coloured sheep one year will be adding their madcap art to the site and there will be Intimate Voices in the woods!

Radio 4 will this year be in the arena with live broadcasts and recordings of shows including Loose Ends, Poetry Please, The Now Show and Just A Minute with Nicholas Parsons. There will be Aspall's cyder at Latitude and Penguin books will be bringing the Penguin Classics library, plus the Pimms Bus will be at Latitude but there will also be a 'Henham Park Island Paradise' which you can row out to and enjoy a glass of the summer drink.

For much more in-depth information on this year's Latitude festival click here to see the news section.

This year there will be a dedicated family campsite, for families with children under 13 (who can attend for FREE) within the public camping area and also a family campervan area within family camping. 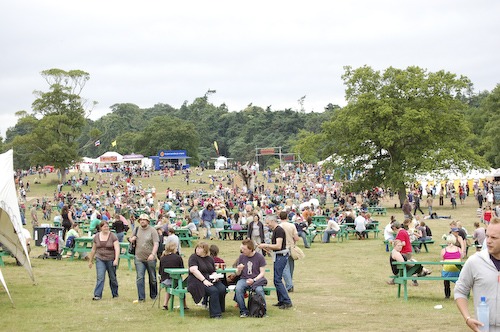