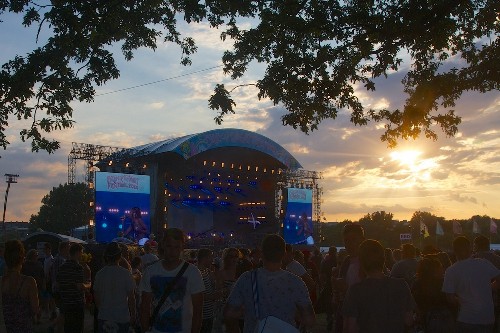 The festival which offers top rock and indie names, legendary acts, and rising stars, on a large main stage, smaller tented stage, and smaller stages in a relaxed festival atmosphere returns for a 14th year from Thursday 11th until Sunday 14th June 2015.

This year marks 45 years since Jimi Hendrix played the festival, and in his honour the main stage will be named 'The Electric Church'.

Making a return in 2015 is the 5,000 capacity circus style Big Top which plays host to a campers only special night on the Thursday, and acts as a second stage once the festival begins.

As this year marks 45 years since Jimi Hendrix played the festival. Festival organiser John Giddings has announced that he is inviting festival-goers at the event this weekend to participate in a world record attempt. At 3.30pm on Saturday 13th June all those present at the Electric Church Main Stage, will wear special Jimi Hendrix masks to commemorate 45 years since he played the festival, and break the record for most people in the same place wearing masks at the same time. All money made from the sale of masks will go the the festival's chosen charity, WellChild.

Strongbow Tree – Visible from all around the site, this 12 metre-high installation is topped with a DJ booth to entertain guests into the night. Festivalgoers can relax on loungers or dance away in the pavilion, enjoying games, giveaways and sampling from Strongbow.

Bulmers Colourena – An experience like no other, festivalgoers of all ages can head down to the Colourena to cheer, laugh, singalong and get involved in quirky challenges as teams battle it out for prizes.

Jack Rocks Stage – Jack Daniel’s has teamed up with rock ’n’ roll clubnight This Feeling to showcase emerging talent and host special guest slots from the likes of Zutons frontman Dave McCabe. With a late license until 2am, this stage keeps the party going into the early hours.

Electro Love – Transporting festivalgoers back to the 80s, this tent is packed with video games, BMX bikes, UV lights and bubble parties. Take a trip down memory lane and dance along to a soundtrack of DJ battles and tribute acts.

Cabaret Noir – This adults only venue plays host to the weird and wonderful. Set in a beautiful garden, contortionists, burlesque, a peep show, drag queens, fortune tellers, snake charmers and circus acts all inhabit this magical area. With a dedicated Cockatoo Bar and the Camp Cooks, this is where Festival memories are made.

Wandering further afield, Stand Up To Cancer will be bringing a huge water slide and music lovers of all ages can explore the secret garden path leading to The Bohemian Woods, relaxing in its magical and serene atmosphere. This year sees a brand new show in the woods on the Saturday as the Midnight Bakery crew team up with Cirque de la Quirk, taking visitors to another world packed with fire eaters and jugglers.