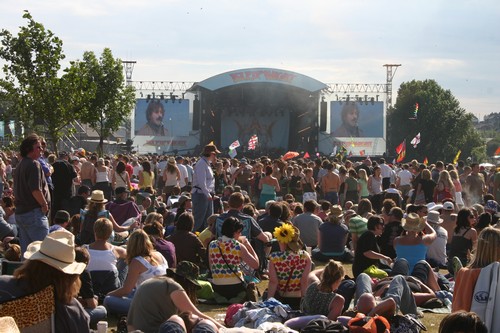 The dates for the eighth Isle of Wight festival are confirmed as from Friday 12th until Sunday 14th June 2009.

The confirmed acts for 2009 include The Prodigy who headline on Friday, with Stereophonics, and Razorlight confirmed as joint Saturday headliners, and Neil Young headlining the Sunday. Basement Jaxx, Pendulum, Maximo Park, White Lies, The View, The Rifles, Pixies, Simple Minds, The Pigeon Detectives, and The Script are just some of the names confirmed to appear on the main stage.

Tim Burgess of The Charlatans curates the Sunday of this year's Big Top, and will headline it on the same day, as well as a full line-up there's DJ sets from Tim Burgess, Rhys Webb, and The She Set.

Also appearing there on the Saturday will be Australian Pink Floyd, Calvin Harris, McFly, Mercury Rev, Ultravox, and more. Friday is Ladies night with Bananarama, Ladyhawke, Alesha Dixon, and The Noisettes. For campers The Human League lead the entertainment on the Thursday night. For the line-up details, day splits, and rumours as available please click here.

Tickets were priced at £140 for an adult ticket with camping which includes entertainment in the campsite on Thursday night, and £70 for a child ticket (12 years and under). The price of an adult ticket without camping is £120 and £60 for children (12 years and under). Every person attending the festival must purchase a ticket. This includes babes in arms.

Tickets have sold out, a limited number of tickets will be held at the door to combat touts over the weekend.

Making a return in 2009 is the 5,000 capacity circus style Big Top which plays host to a campers and Festival First Members only special night on the Thursday, and acts as a second stage once the festival begins.

Away from the Main Stage, the Platform One Bandstand offering unsigned acts and local bands, around 50 acts in all.

The Ray-Ban Rooms also make a return with a bar, dance floor, 'green room' hang out area, and The Balcony, which will host to a series of filmed acoustic sets over the course of the weekend. Acts including The View, Maccabees, and Esser will perform at the venue.