Family friendly and laid-back offering a multitude of different musical styles with classic and modern acts, plus entertainment, children's area, art and crafts, and a truly festive atmosphere.

This year GuilFest will take place at Stoke Park, Guildford in Surrey with the dates confirmed as Friday 13th to Sunday 15th July 2012.

There will be live music over seven stages, comedy in the eFestivals Cosmic Comedy tent, and elsewhere you'll find wonderful and truly unique theatrical performances from Grease to Lewis Carrolls' Jabberwocky all weekend long in The Man In the Moon Theatre Tent and Farmer Giles Barndance, La Discotheque, The Mutiny Rock Cave After Party, and many more exciting areas for you to explore, as well as a unique family friendly atmosphere you simply can't find anywhere else! On top of this, you can expect more shows, fun and games than ever before with performances from the Booster Seat Theatre Company of Hansel, Gretal and you.. who? and Alan In Wonderland as well as great acts involving dare devil stunts and fantastic fire-shows.

There will also be a late licensed 150 foot beer tent bar which means nobody has to wait very long for refreshment, cocktail bars, and lots of clean toilets throughout the site and camping areas.

The music starts at around 5pm on the Friday, and noon on Saturday and Sunday. Music finishes at 11pm on Friday and Saturday, with an earlier 9:30pm finish on Sunday. With late night comedy, and more for night owls.

Car parking is right next to the festival site so no long walks heaving camping gear for anybody.

The campsite is expected to open at 10am on Thursday morning, with the main site opening at 10am Friday Morning. The campsite usually has entertainment on Thursday night with a bar and disco!

Click HERE for information about all aspects of GuilFest. 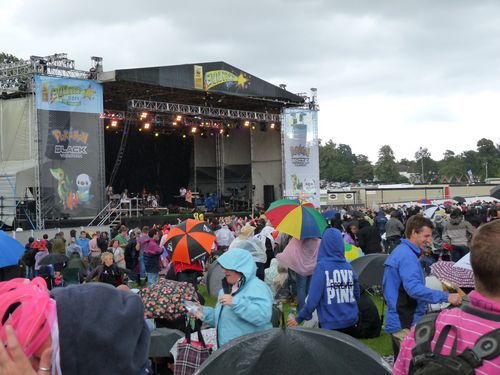