Hundreds of international and UK pop, cutting edge, hip hop, electronic, and rock acts showcased at venues all over Brighton.

For the line-up details including day and venue splits please click here.

Enter Shikari will play the Concorde 2, on the Saturday, this show will be a separately ticketed fan show.

The line-up will include over 300 acts from around the globe in 34 venues within Brighton City Centre. The Great Escape Festival utilising the spaces that Brighton has to offer. The main activity will be focused around the "Level" and the seafront, with some larger venues helping to reduce any queuing. The venues will all be a close walk from each other with each venue equipped to an international showcase standard.

Lightspeed Champion will be curating the Topman CTRL stage at The Great Escape.

The headlining show will be a separately ticketed event, access is not guaranteed with a TGE wristband. A Kasabian only ticket was priced at £22.50, and a 3-day festival and Kasabian joint ticket was £62 - these tickets have now sold out.

Early bird tickets were on sale. Tickets are now priced at £45. The ticket entitles you to entry to all gig venues over the 3 days for over 18s only. To buy tickets click here. 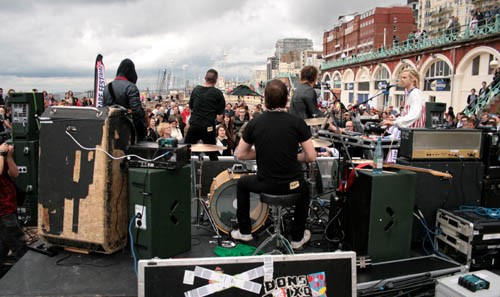