The 2012 dates are confirmed as running from Thursday 14th until Sunday 17th June at its new home of Houghton Hall in Norfolk.

Gladers and early bird tickets have sold out. Tickets are now priced at £135. A campervan pass is priced at £50. The deposit scheme will allow you to spread the payment of the ticket(s) over 2 easy installments (£50 plus booking and then £85 per ticket), the balance payment must be completed by the 14th of May 2012. To buy tickets, click here.

Glade festival has stepped in to help soften the blow of the cancellation of Golden Down Festival. They are offering all Golden Down ticket holders admission to Glade festival (usually £127.25), which takes place the same weekend, in a direct exchange.

Under 12s are allowed into the festival for free but require a ticket. However Glade Festival will not allow anyone between the ages of 13 and 17 years into the festival. Photo ID will be requested if you look under 18.

This year Glade have sourced some of the best independent traders around. The food court will be a place to meet your missing friends, take a breather from the madness of the festival, regroup, relax and unwind. There will be a huge variety of food and drink from all around the world on offer, including many vegetarian and vegan options.

There will be a Green Tax of £2.50 per empty car seat payable on the gate.

Expect a market, sound systems and cafes such as Chai Wallahs, Come and Play, One Tribe World Stage, Punjabi Lounge, and TRiBE of FRoG - The Frog Pond.

The festival has full camping facilities, car park, licensed bars open until late, food stalls and markets, and more besides.

For detailed information about various aspects of the festival see the Glade Information (includes detailed info on camping, travel, food & drink, and more). 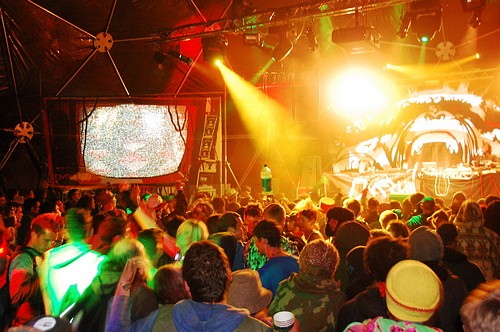