The 2009 dates are confirmed as running from Thursday 16th until Sunday 19th July, at a new location Matterley Bowl near Winchester, Hants, around a half an hour's drive from the old site.

Expect the stages to open each day by early afternoon, and to run into the early hours.

In 2009 the festival will have a more intimate feel, as well as the outdoor main 'Glade' stage, there will be more small stages, and fewer large tents, and several new areas.

New this year is the Avalon Field conceived as a festival within a festival and dedicated to a way of life and attitude to living, as much as partying. This will be an area where music, art and all forms of expression thrive and connect at this highpoint of the Psytrance movement.

The Chillout area has evolved... It's now the inSpiral Chill. With a new feel and look run by the people behind the inSpiral Lounge in Camden and Aliji who will be programming the music and performance to create a space where you will be able to relax, heal and recharge with an amazing organic cafe, beautiful decor and downtempo music.

Expect a market, sound systems and cafes such as Chai Wallahs, Come and Play, One Tribe World Stage, Punjabi Lounge, and TRiBE of FRoG - The Frog Pond.

Tickets were on sale, the full price was £125. Camper Van Tickets are available at a price of £40. The festival has SOLD OUT of tickets this year.

For detailed information about various aspects of the festival see the Glade Information (includes detailed info on camping, travel, food & drink, and more). 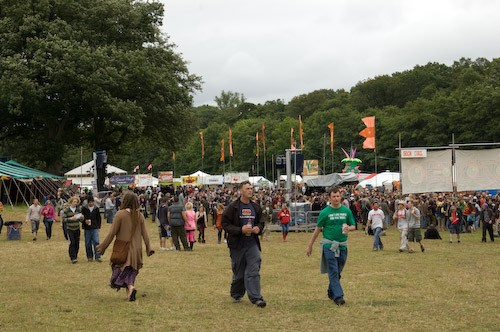