Started in 2006, the organisers aim is to "organise an intimate festival with our favourite artists, and to offer the bands an opportunity to play longer sets, compared to most other festivals." As the programming is done by the organisers who book acts they like, the line-up on offer is far more interesting than many other festivals. The dates for 2010 are confirmed as Friday 10th to Sunday 12th September.

The End of the Road festival caters for about 5,000 people. There are three music stages, with the Big Top open to 2am. There's also comedy and a cinema tent hosted by Little White Lies film magazine.

For the first time End Of The road will be allowing early entry to the festival on Thursday 9th September when camping and some parts of the festival site will be on Thursday afternoon. Festival goers can arrive, set up camp, spend the evening finding their way around and be ready to hit the festival when the entertainment starts on Friday. There will also be a few small bands playing the tipi stage, the cinema will be running, and bars and catering will be open.

The festival will be increasing the size of the Tipi Tent, which will now be a circular tent of Tipis which are joined together, creating more viewing area, while keeping that magical intimate feel.

As 'The Local' booked such popular bands for their stage last year, The End of the Road has also decided to increase the size of their venue and give them their own mini Big Top.

The festival will also have an increased program of workshops for both children and adults, with sessions that carry on longer into the evening.

The Larmer Tree Gardens is about 2.5-3 hours drive from London, and falls on the border between North Dorset and Wiltshire, fairly close to Stonehenge. It's a beautiful venue with gorgeous views and with peacocks and huge parrots roaming / flying around freely both inside the gardens and in the field. The festival will be open on Friday 11th September 2010, from 10am until Monday 14th September at 12 midday. 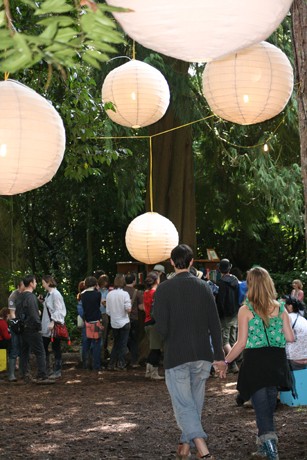