PJ Harvey and Bon Iver are both playing in the Big Top on Saturday night (PJ requested that she played indoors as its going to be a very special intimate acoustic show). While PJ is performing in the Big Top the sound system in Bollywood needs to be switched off so the music doesn't bleed through and spoil PJ's set. During this time Bollywood will continue as a Silent Arena party with DJ Yoda DJing and you lot listening through headphones! The Big Top will also host Silent Arena parties on Friday (midnight - 3am) and Saturday (11pm - 3am) nights with some very special guest DJs.

Camp Bestival is all about bringing back the British Holiday Camp... Bestival style! A place where Hi de Hi camping capers meet the spirit of early festivals and as well as entertainment, comedy, and literature.

Camp Bestival's fancy dress theme for this year has also been announced as 'Animal Magic'.

There will be a full programme of other entertainment including comedy, arts & crafts, spoken word, dance, and more. The first comedy acts announced include Frankie Boyle (a UK Festival Exclusive), Phill Jupitus, Marcus Brigstocke, Andrew Maxwell, and Andre Vincent.


Camp Bestival's fancy dress theme for this year has also been announced as 'Animal Magic'.

Camp Bestival also introduced a new ticket payment plan offering a staggered payment system that gives you the chance to spread the cost of buying tickets across three equal payments. Ticket buyers paid a third of the total ticket price with the further two payments spread across the following two consecutive months. This payment system was a UK festival first. The scheme was available to families and to individuals buying Weekend Camping tickets.

Ticketline have had a very small number of weekend ticket returns and these have just been put back on sale. An adult weekend ticket is priced at £130, with a child ticket (aged 12 to 16) priced at £65, with children under-12 free (but require a ticket), and campervans cost £60 per vehicle. There is a 'Family Weekend Camping Ticket Deal' which offers 2 adults and up to 4 children aged 15 and under tickets with camping for £295.

Tickets are available without camping, an adult weekend ticket is priced at £100, with a child ticket (aged 12 to 16) priced at £50, with children under-12 free (but require a ticket). There are 'Family DAy Ticket Deals' which offers 2 adults and up to 4 children aged 15 and under tickets for £80.

Campervan tickets have sold out, please note their is only one campervan site. Cars will not be allowed into the Campervan area at any time so consequentially Caravans, Trailer Tents etc are not permitted.

Tickets are no longer available.

As well as evening entertainment until the early hours for those wanting to dance, there's fun for all the family at this festival. There's a Kids Area filled with things to keep little ones of all ages entertained all day long in a jam packed haven for kids and their parents. Plus Lulworth Castle has its very own Animal Farm where the kids can get up close to their super-friendly animals.

For Camp Bestival 2009, the Bollywood Tent is getting bigger and will offer more DJs. The Dingly Dell Trail will offer an interactive performance area for kids and adults by day, with a darker edge late night with new site specific performances that have been commissioned exclusively for Camp Bestival. The Time For Tease which fuses the tradition of British afternoon tea with the decadent world of burlesque cabaret will also return with Burlesque performances, cabaret singers and of course the Time For Tease Gateaux Vivants. The Black Dahlia Tent will be hosting daytime dance classes from the Lindy Hop to Salsa, Hip Hop to the Quickstep, and many more besides.

Camp Bestival has a dressing up theme each year, the theme for 2009 has not yet been announced. Bestival's Dressing Up Area will be on hand to help the adults get dressed up and there will also be a separate Kid's Dressing Up Area (& Catwalk) so the little'uns can get involved too! This year kids can enjoy Nickelodeon UK presents...SpongeBob SquarePants & Bikini Bottom, and the LiveEnglish National Ballet presents...Angelina Ballerina's Big Audition in the Big Top on Sunday. Camp Bestivalers can meet the amazing ballerinas and participate in workshops with the dancers over the weekend.

Festival goers can expect a return of the Heavenly Healing area, the Restival chill out zone, The Dingly Dell Trail, the Groovie Movie Solar Powered Cinema, a Happy Campers area, a sports day hosted by Lost & Found, and even some Medieval Jousting.

Disabled Info:
Camp Bestival's organisers are committed to making the festival as accessible as possible and great efforts are being been made to achieve this. The Lulworth Castle Grounds are predominantly flat and are partially serviced by a network of paths. However, Camp Bestival is an outdoor event utilising fields and farm land that could pose problems, particularly in wet weather. With a little help here and there though it should definitely be manageable even in adverse weather. Carers can apply for a free carers ticket and a disabled pass. The Disabled Camping Area is positioned near to the main Lulworth Castle entrance and to the Main Stage. Vehicles with a blue badge (or similar) can park in the disabled camping area. Friends will have to park in the main car park, however. There are charging points for electric wheelchairs available upon request and disabled toilets onsite. Contact the organisers if you have further questions. 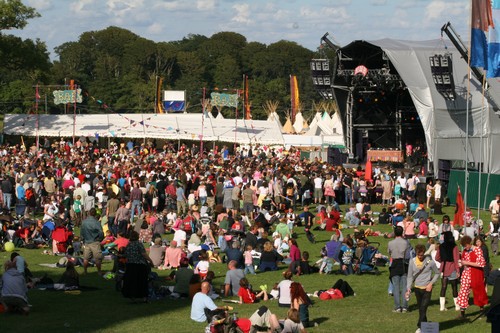