we love this old school, non-corporate festival and can't wait until the next one 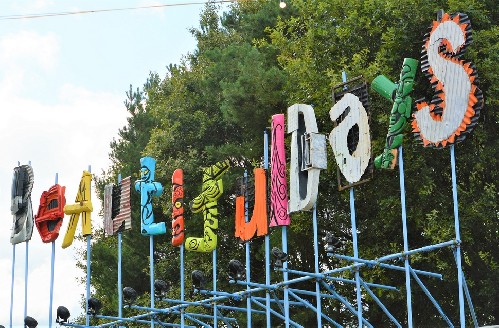 Beautiful Days is a festival that took place this year between August 15th to 18th. The festival site is located in Escot Park, near Exeter. It is easy to find if you have never been before, with the helpful travel information on their official website and clear signage on the main routes. All tickets include onsite camping for up to four nights, Thursday through to Sunday night. The line-up for 2019 included performers such as Ziggy Marley, NOFX, The Levellers, Peter Hook And The Light, Grace Petrie, Seth Lakeman, Skunk Anansie, Fisherman’s Friends, The Leylines and so much more.

Thursday afternoon, the Beautiful Days staff were working hard to make sure that everyone got onto the site safely, this assured us a smooth and easy entrance.. We got our wrist bands and set up our home for the next few days. As soon as that was done, we awarded ourselves with a beer and sit down. It was thirsty work assembling the awning and getting the rusty old camper all comfy! Especially because it was a very warm day, the warmest of the weekend. At 2pm, the festival grounds (and not just the camping grounds) were open. This afforded us a few hours till the first band at 5pm to have some dinner, drink a few drinks and browse some of the shops. These were lowkey non-scheduled gigs in the Dirty Davey’s bar, with performers such as Smokin’ Donuts, The Devil’s Prefects and Nigel Clatworthy. 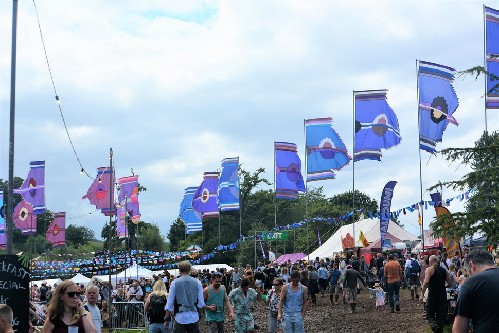 Day two was rainy, wet and muddy all day long. It felt like the rain only seized to thrash from the sky for merely a couple of minutes for the entire day. Luckily, we were well prepared with waterproof walking boots, wellies, raincoats (with hoods!), waterproof trousers and an umbrella. All of which I recommend if the forecast is as wet as it was at Beautiful Days this year! However, the rainfall did not stop us one little bit in enjoying all the festival had to offer. This was made easy as all stages, except from the main arena, is indoors and out of the wet.

Beans On Toast, (also known as Jay Mc Allister) is a lovable, relaxed person who pours good vibes into his lyrics and music. We were lucky to have guest musician Tensheds play keyboards for a few songs, who is very talented. Favourite songs of the set included ‘Take Your Shit Home With You’, ‘M.D.MAmazing’ and ‘Magic’. Jay added in an extra song for a little girl who had written on some cardboard for him to play the song ‘Alexa’. She even covered it with clingfilm to stop it from getting too wet! This was really sweet but the highlight of the show was when Jay’s one year old daughter came onstage for a song. Jay repeatedly saying “wee wooo!” into the microphone and waiting for her to say it back had us in massive suspense. She finally said “hello” and the massive crowd said it back and waved. This was her very first festival and she didn’t want to leave, when Jay told her it was time to go. After this adorable interval, the song was recommenced and ended a feel-good set.

Queen Zee completely and utterly stole the show for me on Friday. They’re an X-rated punk rock band from Liverpool. Frontperson Zena Davine is a force to be reckoned with onstage, I don’t think I’ve ever seen a singer with as much energy and sass. They heavily reminded me of the character Billy Hargrove from Stranger Things (weird comparison I know!), which I was really living for. This does not do Zena ‘Obscene’ Davine justice because their so exceedingly unique. Highlight songs were ‘I Hate Your New Boyfriend’, ‘Porno’, ‘Fuck The Pain Away’ and ‘Boy’. They currently have a support slot on Skunk Anansie’s current tour. I really can't wait to see them perform again soon.

Skunk Anansie headlined Friday night and were full of dark brooding energy that appears to have not waned over the past twenty-plus years. Skin, the central person of the band, was the first British black person to headline the Pyramid Stage at Glastonbury in 1999. Skin has the raw power to command a captivating stage performance and vocals. Skin descended into the photography/security pit at least twice during the set and over the barrier to the audience. From chatting to friends and other festival goers, they were definitely one of the most highly anticipated acts of the weekend.

There is an immense choice of food, snacks and drinks at Beautiful Days. We didn’t even manage to get around to trying all the food we wanted to try. However, our favourite we did try was definitely Lalita’s, who provide vegan Indian cuisine. What they cook is both authentic and delicious. We couldn’t wait to eat from them again, as they were our staple eatery at Lakefest last year. Their Thali and Masala Dosa curries are beautiful dishes. Their onion bhajis really are unmissable too. Funnily enough, no onion bhaji can come anywhere close or make any comparison, it’s Lalita’s or nothing from now on! 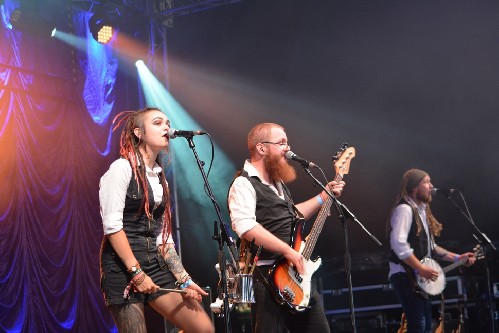 On Saturday afternoon we saw Black Water County, a folk rock band from Bournemouth. They entered the stage with thunderous singing from the crowd: “Oh! Black Water County! Oh, Black Water County!”, in the tune of The White Stripes’ ‘Seven Nation Army’. They have an interesting dynamic, where both Tim and Shannon front the band vocally and engage with the audience. We were lucky enough to hear a new song that is getting a place on their upcoming 2020 album release. My favourite song was ‘Memories From Another Life’. This was sang exclusively by Shannon, an amazing vocalist and multi-instrumentalist, who I always have great things to say about.

My absolute favourite band of the weekend was only ever going to be Peter Hook & The Light. Hooky was announced by John Robb of The Membranes as the most influential bassist of all time. This is something little old nobody me undoubtedly agreed with. They appeared on the main stage, playing half and half Joy Division and New Order. During the first song, Joy Division’s ‘Dead Souls’, I was awestruck and enraptured already. We were blessed with classics such as ‘Shadowplay’, ‘Transmission’, ‘Digital’ and ‘Isolation’. If you think that is unlikely that Division’s bassist can do Ian Curtis’ vocals credit, then please go and see them and be thoroughly proved wrong. Hooky plays with solemn elegance, with cheeky pokes out of the tongue to band members and the audience. ‘Love Will Tear Us Apart’ as always finished the gig and I was sad to see them go. My next thought was “when can I see them next?”.

Ziggy Marley, headlined Saturday night, to the joy of everyone attending. He has a striking resemblance to his father reggae legend Bob Marley. Songs we really enjoyed were ‘Love Is My Religion’, ‘Circle Of Peace’ And ‘Justice’. It was a surreal experience to see him perform live, he was also accompanied by his band and female backing singers/dancers. A special treat for the audience was a performance of his father’s significant songs ‘One love’ and ‘Get Up Stand Up’. It was an unmissable performance and Ziggy seemed at complete ease playing to such a huge amount of people. 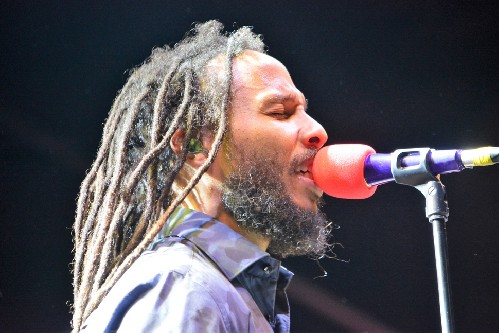 The Membranes appeared on the main stage bright and early on Sunday morning. They were again joined by their choir, which has grown in members since our last seeing them. This may sound weird for a punk band to be accompanied by a choir, but somehow they really make it work. John Robb was his usual erratic punk frontman that we know and love. My partner exclaimed to me that ‘Do The Supernova’ was his favourite song. It was worth getting up for!

In the evening, NOFX, Los Angeles punk band disgraced the stage in such a great away. Fat Mike, their singer, donned the stage in a teal velvet dress. Later in the set we found out he was wearing matching knickers! I enjoyed discovering that wearing dresses is a norm for him when the band performs, as people should wear whatever they feel comfortable in regardless of what the label says. There was plenty of banter between songs and three people from the crowd were called up on stage for a few giggles. Their performance certainly divided the opinions of the Beautiful Days crowd.

Other highlights for Sunday included The bar steward sons of Val Doonican’s Sunday service (seemingly becoming the regular replacement to the Fabbies) with more laughs, comic cover reworkings and on stage guests than you could shake a stick at. Nick Parker’s sing-a-longs ‘Es Tut Mir Leid’ complete with lyric boards held up for the crowd, ‘Terry and June’ and Les Carter (of Carter USM fame) joining for ‘The only living boy in New Cross’. Sound of the sirens song writing and onstage banter/stories always make us smile. Also the ever popular, rising through the stage rankings from slots at the bimble inn many moons ago now to playing to almost what felt like a Levellers sized audience ,Ferocious Dog. All of which lead us to the inevitable finale of the weekend and our hosts, The levellers, who play a classic set which also includes a cover of the Clash’s ‘English civil war’ and a cracking firework display. 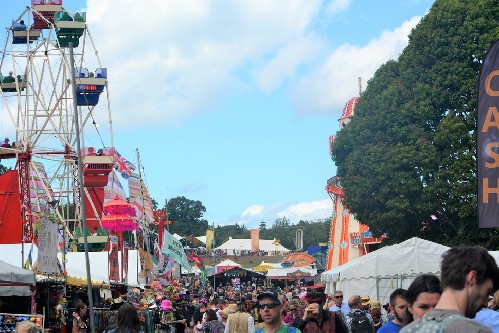 The Rebel Tent offered talks, debates and performances including a debate with Extinction Rebellion, solo gig from Mark Chadwick and Rocksteady – The Roots Of Reggae. The Theatre Tent had lots and lots of performances going on. One of note was Womans, which took place on Friday afternoon. The Kids Area was well stocked for things for the little ones to do, including a supervised play area, crafting, ferris wheel and helter skelter. The Fancy Dress Competition outside The Big Top was a feast for the eyes, with unique and creative outfits. The theme was dragons, fairies, princesses and everything fairy tale related.

It’s a really hard task to sum up Beautiful Days, as I could talk and talk about it till the cows come home. At £4 a pint, you can’t really go too much wrong. I was also glad to see that the festival has done away with single use plastic cups and has opted for exclusive Beautiful Days reusable ones. What the festival gives, it gives plenty of it. Whether this is music, alcohol, tasty food, fun things for the kids to do, partying or a friendly atmosphere. We love this old school, non-corporate festival (my partner hasn’t missed one of the now seventeen iirc) and can’t wait until the next one.

As a footnote the bandstand was sorely missed this year, it’s been a staple part of the festival and a great stepping stone onto the festivals main stages for many a performer/band, also Redwoods bar to the side of the bandstand for that handy “heading back to the campsite” pint. 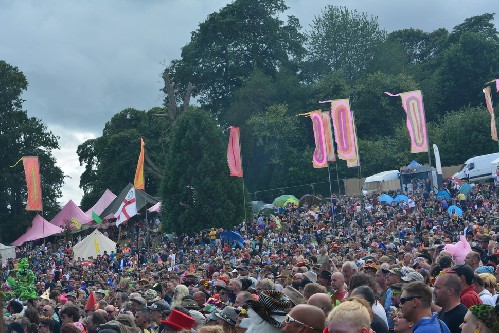