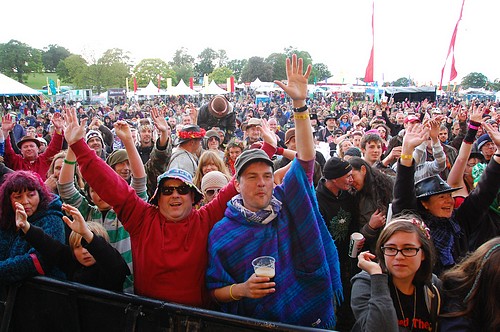 The family friendly, laid back, fancy dress party with beards, bands and DJs, returns as a three day event to Kedleston Hall Park, in Derbyshire and is held from Friday 18th to Sunday 20th May 2012.

There will a charge for car parking of £5. Please note you will be charged £10 at the gate if you do not have a ticket. A campervan ticket was priced at £5 and have sold out.

This year the festival celebrates 'village fete gone wrong' by adding the Inkapa City created Tornado Town a replacement for The Beard Top stage, and a new fun area within the festival offering quality acts and has something that is a little bit different from the standard stage at a festival.

There will be a bar selling a wide range of alcoholic and non-alcoholic beverages, a cocktail bar, with DJs playing a wide selection of music throughout the day and between the bands. The new area will offer a relaxed atmosphere, where festival goers can go and chat and see some quality acts during the day. Whilst at night the tempo will pick up and the musical menu will be wide ranging being anything from Hoedown to Swing and anything in between.

Bearded Theorists can also expect competitions throughout the weekend and the area will be proudly hosting the Sunday Morning surprise slot that Bearded Theory has become famous for.

The Tornado Town stage will join the Main Stage, Magical Sounds Stage, Waters Edge, Something Else, and Baaar Stage. There will also be a new little stage by the river showcasing comedy, poetry, acoustic, kids comedy club and the Saturday on this little stage will be quite special, watch this space.